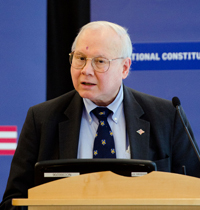 President and Chairman of the Templeton Foundation

The son of the late investor Sir John Templeton (of Franklin Templeton Investments), John “Jack” Templeton Jr. of Bryn Mawr runs the Templeton Foundation, the philanthropy set up by his father.

A pediatric surgeon, Templeton received his medical degree from Harvard University and practiced medicine at Children’s Hospital of Pennsylvania before becoming president and chairman of the foundation in 1995.

The foundation supports research in science and spirituality. Its $1.5 million “Templeton Prize” has been awarded to Mother Teresa and former Watergate felon turned-Evangelical Christian Chuck Colson.

He has also funded national Republican party causes. He has given more than $200,000 to two GOP Super PACS: Raising Red, which is raising money to defeat President Obama, and Red White and Blue, a pro-Rick Santorum PAC. In addition, he has given $100,000 to American Crossroads, the Super PAC founded by Karl Rove.

Templeton did not respond to requests for an interview for this story. An assistant to Dr. Templeton said he had been “tied up” and was not available to comment on his donations strategy.

Credits:PublicSource would like to thank The Center for Investigative Reporting for the use of their political contributions app, Rainmaker. The Investigative News Network coordinated the work between the many organizations sharing information for this project. Reporters Halle Stockton, Emily DeMarco and Reid Fraizer also contributed to this project.

With data collected by